NVC Lighting's infighting has come to an end for several months, and one of the focuses of its business philosophy is not unified - the development of LED lighting is finally unifying its thinking and starting to exert force. NVC, the founder of NVC, announced that NVC will speed up the LED industry's layout and LED lighting will account for half of NVC's revenue in five years.

From the market environment, China's LED lighting upstream industry is generally facing the problem of excess capacity, but also gave birth to a price war. On the one hand, in the eyes of consumers, LED lamps sell at a higher price; on the other hand, there is too little profit for manufacturers. An industry insider who declined to be named said that under such circumstances, it may be more difficult for big brands to make LED lighting. â€œChinese consumer brand awareness is not very strong, as long as it is practical and durable. NVC is a well-known brand in the industry. If you make efforts in the LED market, the cost will be relatively high compared to the average small business. The ordinary people are too expensive. There is still resistance to branding. "Perhaps this is one of the reasons why many leading LED companies do not have large leading companies and big brands.

He Zuhua, a senior research fellow at China Investment Consulting Group, said that although the policy is favorable, it is difficult to predict whether the LED lighting market will soon see satisfactory growth. "First of all, the implementation of the policy is slow, LED lamps are temporarily at a disadvantage in terms of price, production costs are generally higher than other lamps, and the penetration rate among consumers is not high, so it is difficult to break through in the short term. Second, the LED lamp market is homogeneous. The development is serious, and there is a lack of reasonable industry regulations. Violent competition between companies is based on price rather than technology, and the industry is in a state of disorderly development."

In any case, the trend of LED lighting replacing traditional lighting is very clear. The China Development and Reform Commissionâ€™s ban on general lighting incandescent lamps has started in stages since October 1 this year. This shows that energy-saving lighting is the trend of the times, with LED lighting being the most promising market. Many companies understand this trend like NVC and act earlier.

Some time ago, some LED companies have begun to set up similar national sales channels and grab high-quality pipeline resources. It is understood that at the recent launch of the new brand of Shenzhen Green Semiconductor Lighting Co., Ltd., many NVC dealers could be seen. Some NVC dealers stated that NVC's disputes caused its own losses, and NVC did not keep up with the development of new products, or traditional lighting, so dealers looking for a strong brand that specializes in LED lighting.

â€œHigh-level managers rushed back and forth, causing dealers to have no confidence.â€ Liu Buchen, chief consultant of Kuafuâ€™s corporate management consultancy, said that it is normal to lose some of the pipeline after infighting.

It is understood that NVC currently has a small share in the field of LED. Last year, LED lighting sales was less than 200 million yuan (the same below), less than 1/20 of its total sales, and it accounted for the proportion of the entire industry. Minimal.

However, China's LED lighting market is still in the adjustment period. The industry insider mentioned that China's civil LED will gradually become popular. In the process, more than 5,000 LED companies will certainly be eliminated. Industry will usher in a round of integration.

Although Nerase made a late start and the pipeline was frustrated, its performance is still worth the wait. "After all, its foundation and brand image are there," said Liu Buchen. "As long as NVC releases the signal of solidarity to the public, after a while, everyone's confidence will be restored. The LED lighting market has not yet formed a fixed pattern, and There is no big brand that can't be shaken up, so NVC is very hopeful to occupy the market's commanding height."

He Zaihua said that although NVC missed the best opportunity for the development of LED lights, it is more difficult to rewind at this stage. However, with the resources owned by former leading companies, the possibility of returning to the â€œthroneâ€ of the lighting industry still exists. He suggested that: â€œNVC needs to sort out problems in corporate management, reshape corporate image and restore investor confidence. Second, using the context of early-stage distribution, through the merger of small businesses, it is possible to recapture the pipeline. Finally, Increase investment in technology research and development to prepare for the large-scale production of LED and other products in the future."

Our Battery Smart Monitoring system is direct integration of the battery restore solution into computer-based battery monitoring system which combines wireless communication with patented, field-proven battery monitor and analysis technology. It not only has the ability to restore battery, but also has the ability to monitor battery's State-Of- Health(SOH) in real time. It is much more intelligent than Smart Pulse Protector and Pulse Restore System because of it's battery remote management and maintenance function with wireless communication.
It is comprised of 3 base hardware which consists of a monitoring host, several monitoring modules, and several data box modules. Plus 1 software operation system. The monitor parts connected wirelessly with batteries pack and reliably reports battery State-Of-Health(SOH) to the software platform.
The battery monitoring system adopts a inspection module for each battery analysis and monitoring. Through the wireless communication technology, every single battery's SOH data collected by monitor is concentrated into the data box module. The data box module is used to collect the battery's voltage, temperature, internal resistance and current simultaneously. Then transmit all the data to the monitoring host which can do data displaying, analysis, storage, and alarming as soon as abnormal. 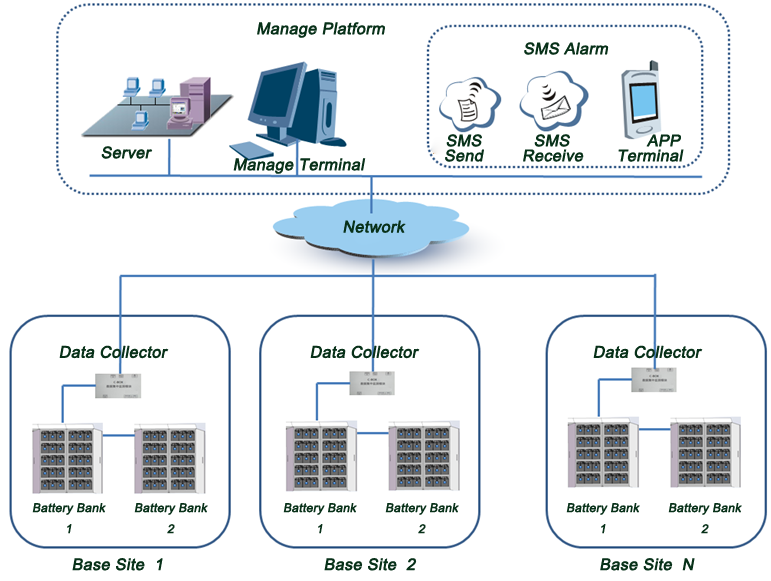 Since the Monitoring system is integrated with Base Site Battery Protector System, The real-time improvement of the battery equalization and small pulse current desulfation, lead to the battery lifespan prolonged up to 2 times. Meanwhile, monitor battery's State-Of- Health(SOH) and State-Of-Charge (SOC) in real time to make sure keeping the back up power system always safe and uptime.