[Text|High-tech reporter Long Zonghui] The LED high-power power market driven by the domestic government and the market is based on the goal of achieving the ultimate in energy conservation, and the products are developing in a more intelligent direction. The Maoshuo power supply with the LSP series 120W LED outdoor drive power competed for the 2014 Gaogong Golden Globe Award. 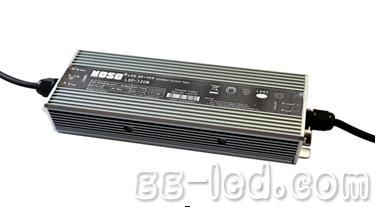 LSP is the new generation of drive power series of Moso Power. The output power range is 60W---320W. This is the 120W product with the most demand in the market. It is mainly used for LED street lights, tunnel lights and landscape lights. The product's innovative integration of constant power, 0-10V / PWM dimming, time control and other functions. This product has wide load adaptability, and the output constant current range is as wide as 14 to 54V, and has constant power characteristics in the range of 28 to 54V. Using the patented soft switching technology, the typical efficiency of working in the constant power zone is 93.0%, and the minimum is not less than 91.0%. The power factor is one of the hard indicators for measuring the quality of LED driver power. It is not less than 0.97 under 230Vac input and full load conditions. .

At the same time, this product has a new dimming and shutdown function based on time control, standby power consumption is less than 1W, and energy consumption is lower. "This product can customize the output current through the professional supporting software provided by Moso, to achieve wide load adaptability, and calmly relieve the pressure caused by the diversification of market lighting specifications. 0-10V/PWM 2-in-1 dimming, The time control function meets the industry's requirements for LED secondary energy saving. Wide load adaptability and dimming compatibility make customers' requirements for power supply specifications greatly reduced, easy to standardize, convenient for centralized procurement, production and inventory management, etc. Production companies or customers are good news," said Chen Hao, product manager of Maoshuo Power.

Based on the current strict quality requirements for LED street lights, and with the gradual maturity of the market, the cost pressure continues to increase. The product adopts a non-potting process that breaks through the traditional technology, all of which is structurally waterproof, and the weight is greatly reduced. The weight and cost are greatly reduced without lowering all other technical parameters. "With the non-potting process, we can reduce the cost of each power supply by at least 8-13 yuan." Chen Hao said.

â€œThis product is positioned in the high-end market. From October 2013, we entered the sample delivery stage. After nearly 8 months of market feedback, this product can meet most of the functional needs of the market.â€ Chen Hao said, welcome customers. Call for samples and support Moso Power's products in the Golden Globe Awards.

About the Golden Globe Award:

The industry research and media organization authoritative in the LED lighting industry---the high-tech Golden Globe Award of the high-tech LED organization--LED good product selection, aiming to jointly recommend and select the LED products with credibility in the industry to encourage Enterprises strive to be the spirit of the first brand.

Since 2010, this industry-renowned selection campaign has been successfully held for four consecutive years. This year is the fifth session. This year's Golden Globe Awards will use the industry's real name WeChat vote + special judges to vote under the real name to ensure the objectivity and fairness of the voting.

Made with the safety of children in mind, sturdily constructed with toy-grade ABS+PP plastic and provides a 100% safe playing environment,Not too bright, not too dim. Just the right amount of light to see where you are going in the dark.Built-in sensitive light sensor, the nightlight automatically turns on at dusk and off at dawn. 0.5W. 12hrs Each day, only use 2.2 Kwh per year. Never need to replace the bulb.Energy-efficient and eye-caring LED creates a uniform non-flickering light that doesn't hurt the eyes.