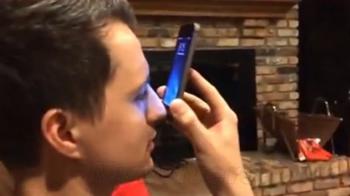 Of course, another reason for the iPhone 5S to be able to fire is not unrelated to the color it introduced. A golden light alone has already allowed many other mobile phone brands in the industry to launch gold-colored mobile phones. This is a big brother's way and leads the entire handset. Market trends.

According to the latest report from foreign website Androidsas, the Samsung Galaxy S5 will join eye-recognition sensors, allowing users to unlock their phones by scanning their eyes.

From Nokia's unlocking mode to the current fingerprint unlocking and pupil unlocking, the user's needs have only changed twice. One is to prevent misuse and the other is to protect privacy (some users feel that they are naked and have no privacy, so come on) Actually, there has been no major change in user behavior. Some people predict that the future unlocking of the mobile phone may be upgraded to the "brush face" level, and the user can unlock the face by brushing.

Why mobile innovation died on the unlock?

The current market is full of dozens of brands of smart phones, including Apple, Samsung, HTC, Huawei, ZTE and so on. Users have more and more demand for smart phones, but the innovation in the mobile phone market is getting smaller and smaller. No matter whether it is Samsung or Apple, it does not have a huge transformation effect on the entire mobile phone market and even user behavior.

An unlocking technology changes only the first level, and there are not many breakthroughs in the hardware and performance of mobile phones. Even a number of recent reports show that several mobile phones, including Apple, Samsung, and Xiaomi, all have a crash and directly cause harm to the user, which is equivalent to a time bomb being carried by the user. It does not change the user's behavior habits. Second, there is no innovation in basic hardware services. What does this added value change? Why do you have to die on this?

Regarding the unlocking of technology, I will tell you a story. A specific network department of a company, more than a dozen people, the initial signing method is punching, and then the new director in the company installed a fingerprint card reader, so as to prevent someone from replacing the punch, and later directly Pupil puncher.

I think the phone unlocking technology is like the company's punching method. The company set up a way to record whether the employees had to be late for work or leave early for the phenomenon of punching cards. It did not fundamentally change the user's work behavior and quality of work. It changed only the leadership to monitor the form of the employees. The user's privacy will not be safe if the mobile phone has added unlocking technology. The mobile phone software problem that has been frequently exposed in China has always existed. This is a â€œlong robe that costs thousands of dollars and you feel that you are The emperor's livelihood is not worth it for tech companies to flock to it.

What really needs to change in smart phones is how to serve users. This is when a user is king, users will pay more and more attention to their own feelings about the product. The mode of mass production is not much different from the simple and rudimentary primitive era. Users will pay more attention to their own use of this phone's feelings, and even whether this phone has the user's own participation in the production or design, whether it is only a user, change for the user, rather than a simple cool, Hyun.

FGI`s FGSVG series High Voltage Static Synchronous Compensator adjusts the reactive power output by dynamically tracking the change of grid power quality, realize curve setting operation and improve grid quality. In the distribution network, the installation of small and medium-sized FGI`s high voltage STATCOM in the vicinity of certain special loads (such as electric arc furnaces) can significantly improve the quality of power at the connection point between the load and the public grid.