In the field of electronic equipment, taking automotive electronics or some military equipment as an example, it has high requirements for high temperature and high humidity environments. With the development of such products towards higher density, the pitch of the holes is getting smaller and smaller, which makes the reliability requirements of the printed board to the holes correspondingly improved, so the conductive anode filaments produced by the printed circuit boards become the reliability of the products. Key factor.

Conductive anode wire (English abbreviation: CAF; full name: ConducTIveAnodic Filament) refers to the copper inside the PCB from the anode (high voltage) along the microfissure channel between the glass filaments, copper and copper during the migration process to the cathode (low voltage) The leakage behavior of copper salts. When the PCB/PCBA is energized in a high-temperature and high-humidity environment, a serious CAF may be generated between the two insulated conductors along the resin or glass fiber interface. This phenomenon will eventually lead to poor insulation or even short-circuit failure.

The short circuit caused by CAF is shown in Figure 1. 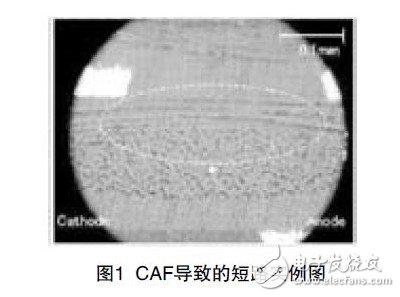 The CAF production process can be studied in two steps, namely the formation of ion migration channels and the growth of anode filaments.

Under high temperature and high humidity conditions, the adhesion between the resin and the glass fiber deteriorates, and the silane coupling agent on the surface of the glass fiber is hydrolyzed, resulting in the generation of an electrochemical migration path (ie, a channel for copper ion migration). .

After the ion migration channel is generated, if there is a potential difference between the two insulating holes at this time, the copper on the anode having a higher potential is oxidized to copper ions, and the copper ions migrate to the cathode having a lower potential under the electric field. In the process of migration, it combines with impurity ions or OH- in the plate to form a water-insoluble conductive salt, and deposits it, so that the electrical spacing between the two insulating holes is drastically lowered, and even direct conduction forms a short circuit. At the anode. The electrochemical reaction of the cathode is shown in Figure 2. 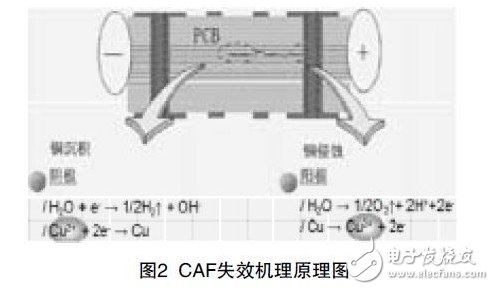 2.2 Factors affecting the formation of CAF

For finished PCBs, the main factors affecting the formation of CAF are:

(1) The occurrence of CAF is mainly along the direction of the glass yarn bundle. The misalignment arrangement can form a detour to the generation of CAF, so that CAF failure is not easy to occur.

It is well known that copper clad laminates are pressed from prepreg and copper foil, and different prepregs have a large difference in CAF properties depending on the woven structure of the fiberglass cloth used.

The following are the physical weave structures of three common fiberglass cloths. The resin content and wettability advantages of these three braided structures are compared (Fig. 4): 1080>2116>7628, that is, 1080PP sheets are the least prone to CAF failure.

The tiny voids created between the glass fiber and the resin surface during PCB processing have a great influence on CAF performance, including the following aspects:

(2) Degumming parameters: The suitability of the glue removal parameters directly determines the cleanliness of the hole walls, which in turn affects the wall roughness.