Due to the revolutionary breakthrough in the Internet of Things, more and more devices can connect to the cloud via Wi-FiÂ® and BluetoothÂ®. The purpose of the load switch is usually to disable the wireless when the smartphone is in standby mode, or to use it in other high-energy subsystems to save energy and reduce the total power consumption of the device, so that the battery can be powered longer.

How the load switch works

How much power did you save?

An example of a real-world environment: We assume a 5Î¼A WiFi or Bluetooth RF circuit with a sleep mode. I will use the TPS22915 load switch to compare power savings when using load switches and when not using load switches. When there is no load switch, the power consumption of the radio in standby or sleep mode is approximately 5Î¼A, as mentioned above. In the data sheet of the TPS22915, the typical value of I SD (off current) is 0.5 Î¼A. Do not confuse this with IQ or quiescent current rated at 7.7Î¼A, which is the active power dissipation of the load switch. By increasing the TPS22915 (Figure 2), the power consumption is reduced by 10 times! 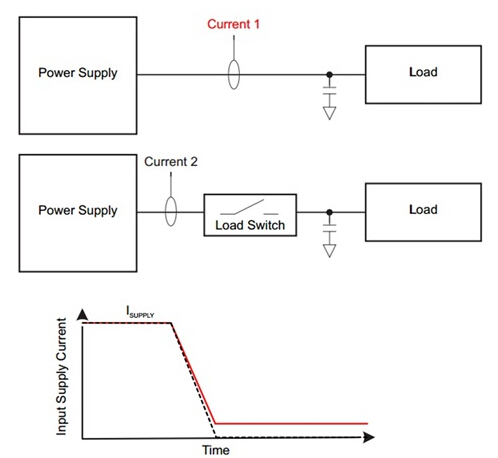 Figure 2: Comparison of standby power consumption with and without load switches

Now let's assume that our Wi-Fi chip performance is reduced and the current consumption is close to 250Î¼A in standby or sleep mode. Then adding TPS22915 can now reduce energy consumption by 500 times! By saving energy, users can reduce the size of the terminal device by using a smaller battery or extend the standby time between charges.

Which load switch is right for you?

When selecting a load switch, you need to make sure it has the correct rating for your application. Pay particular attention to the maximum voltage, maximum current, and on-resistance (RON). After confirming that the load switch has the correct voltage and current rating, it is necessary to determine the acceptable power loss (V = IR voltage drop). TI offers a wide range of load switches to choose from; the latest in this family is the TPS22915. The TPS22915 has a typical RON of 38mÎ©. For a 1.5A load, the voltage drop across the load switch is 57mV (V = 1.5A * 38mÎ©). Apply 3.3V, 1.5A to VIN and the value of VOUT is approximately 3.24V.

As the load current increases, the RON of the load switch becomes more and more important because the voltage drop is proportional to the current. This is also why the TPS22915's RON at 3.3V is 31% lower than a similar load switch. When the TPS22915 is not used, the value of VOUT will be approximately 3.21V instead of 3.24V. Figure 3 compares RON on VIN. 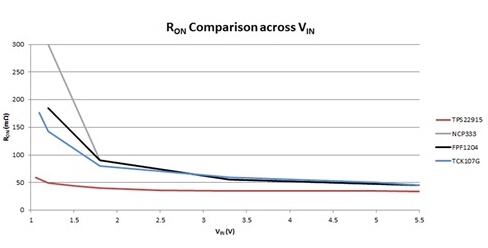 Read the basics of the load switch operating instructions, learn more about the load switch, join the Texas Instruments online technical support community load switch forum, search for solutions, and get to know the experts.